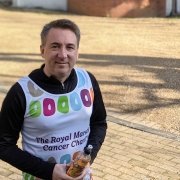 One morning in July 1997, I woke up with a pain in my right buttock.

I was struggling to walk and had to get myself to the doctors to figure things out. This was made more complicated by the fact my girlfriend* and I had moved to Sydney four months earlier and being ‘male’, I of course hadn’t even considered registering with a doctor.

The last thing the company doctor said to me during my medical, before leaving the UK was, “You have medical insurance during your secondment – here’s your BUPA gold card – you won’t need it – but just in case.”

Four months into the secondment and two days after an initial visit to the doctor, I was sat in front of a specialist haemotologist. My white blood cell and platelet counts were at 10% of normal levels. I was seriously ill.

“I don’t know,” he said, looking down at his desk.

His reply has never left me.

On 31 August 1997 (the same day Princess Diana died), I had doctors and nurses hugging me with delight in my hospital room. Despite being minus a spleen (a much over-rated organ), I was finally diagnosed with the incredibly rare Hairycell Leukaemia, which generally affects people over 50. I was 26.

They were hugging me, because the two other possibilities were much, much worse.

We were all so thankful it was ‘just’ Hairycell Leukaemia

I was treated initially in Sydney.

18 months later, the disease returned when we were back in the UK. I was treated again.

It then returned again in October 2003, a few weeks before my son was born. Really not part of the plan.

I was referred to the Royal Marsden hospital in London – a specialist cancer hospital, where I was put on a trial combination of chemotherapy and monoclonal antibodies. The hope was that 1+1 = 5. It turned out the hope was correct and this trial has since turned into one of the standard treatments for treating the disease long term.

In January 2004, it was announced that I was in complete remission for the first time.

Fast forward to February 2020 and I’m still clear of the disease, having been looked after by the amazing staff at the Royal Marsden ever since.

I visit twice a year for blood tests and consultations. I sit in the waiting room for an hour, counting my blessings and keeping my fingers crossed.

It’s as sobering as it gets.

It makes me thankful. It makes me so grateful for everything around me. I get to reaffirm my mantra, to live every day.

I’m going to be running the London Marathon in April

It’s time for me to help this amazing hospital in a small way.

I’m doing it as a personal challenge as well as to raise a ton of cash to help those in need … to help find cures … and to generate hope for those who need it most. I’m one of a team of about 35 and I’m slightly terrified.

How can you help?

If I’ve ever helped you, worked with you, got drunk with you, paid you, laughed with you, delivered something for you, filmed you, interviewed you, measured your customer satisfaction, delivered a speech to you or referred you, I would be SO grateful if you’d consider sponsoring my endeavours with a few pounds / dollars / zen / euros / zloty.

With the lousy GBP exchange rate, your euros / dollars and zen will go a VERY long way to help those, who’ve helped me. If you’re here in the UK, your pounds still work very well.

Spare a thought too for everyone running, walking or crawling the 26.2 miles around London on 26th April 2020 and raising billions for the causes which mean so much to them.

This one means so much to me.

*and now amazingly my wife of 20 years, despite everything I’ve put her through ❤